Back in April, I was lucky enough to get my first iPad. I’ve had an iPhone for a couple of years now, but the iPad – with its large screen – really opens up possibilities for use in the classroom.

I soon discovered there are lots of music apps (of varying quality) and I’m still testing many out to create my list of favourites.  I lean towards the apps that are more than novelty value: ones that will have longevity, that can be incorporated into existing learning and performance activities.

In the meantime, I’ve been keeping up with a raft of iPad/iPhone blog posts written by music educators around the world as well as exploring websites that focus on the use of iPads in general education.  I thought I’d share some of the best ones here:

Joanna Sisk-Purvis first wrote about her experience with her iPad back in 2010 in her post titled Music Education and My iPad. She has since gone on to write a further 8 posts – her iPad App Mega List – which offer an thorough run-down on the music and non-music apps she uses:

Soon after the first iPad was released, James Frankel (Managing Director of Soundtree) imagined a music education future with iPad/tablet devices in his article iPads in the Music Classroom.  More recently, he published a list of apps suitable for music education, sorted by category:

My friend Samuel Wright – an educator based in New South Wales – is very active on his own blog and has written a series of posts about iPads in music education, including these ones:

The Victorian Education Department is currently running an iPads in schools trial with selected schools in Victoria, Australia.  They have a useful website that offers tips for iPad use in the classroom.  The site includes a list of educational apps (paid and free) and two online digital books (which are also downloadable):

Classroom Ideas for Learning With The iPad

Paul Shimmons has a blog titled iPad and Technology in Music Education and posts frequently about apps and tips for using the iPad.  His collection of articles about apps for the iPad can be found here.  I also encourage you to explore the other articles on his website.

Although it doesn’t seem to be have updated for some time, the iPad in Music Education Project site is still a useful resource for music educators wanting to explore the use of iPads in the classroom.

[Update: you can also visit the A.P.S. MusicMaster Pro website for more info]

On Christopher Russell’s Technology in Music Education blog has featured a Comparison of 5 iPad Sheet Music Readers and an interesting iPads FAQ section as well as a number of other iPad and iPhone/iTouch-related articles.

And as for my own favourite apps? Well, you’ll have to wait for those.

Perhaps you have some of your own favourite iPad or iPhone apps you’d like to share?  Post a comment below – I’d love to know which ones you’re using and how you’re integrating them into your teaching. 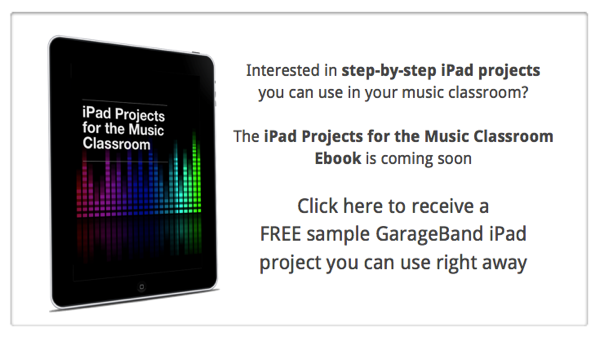